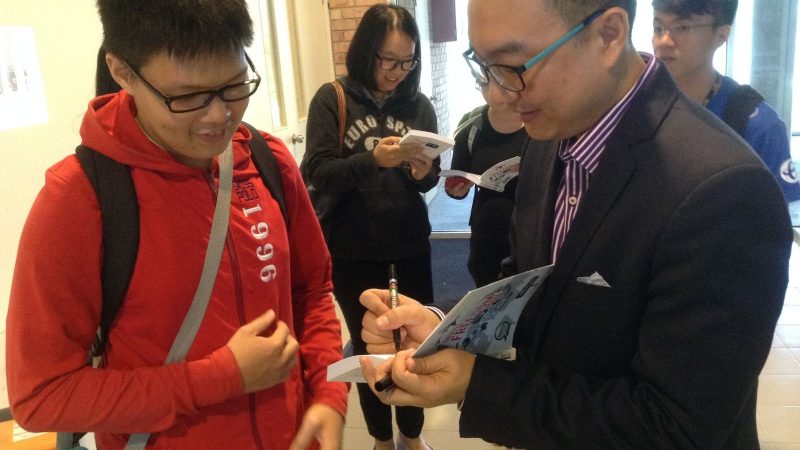 “How do you turn your passion into a business?” asked Tham Chee Wah to more than 100 English, English Education and Journalism UTAR students at his talk entitled “Confession of a Happy Entrepreneur”. The talk which was held recently was organised by the Faculty of Arts and Social Science (FAS) at UTAR Perak campus.”The main objectives of this talk are to inspire students to become writers, to expose them to entrepreneurship and marketing strategies and to provide students and staff with opportunities to make industry connections” said Asst Prof Dr Cheah Phaik Kin, the Dean of FAS. Also present were Tang Ying Ying, Head of Journalism Department, Foong Soon Seng, FAS lecturer, and Samuel Sum Koon Theng, Assistant Retail Manager from Popular Book (CO) Sdn Bhd (Kinta City Outlet), the corporate sponsor for the event.

During the talk, Tham shared his experiences in travelling to more than 40 countries, and over 300 cities in the world. In his debut effort in publishing a book (Invite Freedom Home), Tham took the audience through his travels which started from his hometown in Malaysia to fascinating places that included the lost civilisation of the Incas in Peru, the Angkor Wat Temples in Cambodia, the sacred Mount Sinai in Egypt, the revered Buddha’s birthplace in Nepal and the romantic backwaters of Kerala in Southern India. He shared about the life-changing adventures throughout his journey and explained how being a content consultant gave him the freedom to travel while maintaining his career. He is a speaker as well as a writer for newspapers and magazines. On top of that, Tham has shared some of the possibilities of creating a meaningful life infused with passion and liveliness. He stressed on the continuation to serve through your work and reach out to touch lives, and most importantly, to spread happiness to others in our life.

During the interaction session, Tham was amazed with the UTAR students’ preferences to serve others as he asked the students about their future plans after they have completed their studies. One of the students, Wee Liang Chong mentioned that he would probably teach after completing his degree in UTAR. Another student, Jasmine Chuah Hui Ling indicated that she might apply for Teach for Malaysia (TFM), to become a part of the education line and teach in a less fortunate community. Tham’s life principle is simple; “The origins of man is kindness”. He believed that the essence of “kindness” is everywhere, within the society, within every human being. He acknowledged that the simple act of kindness could lead to happiness. He ended his talk by saying, “Life is simple, just smile”.