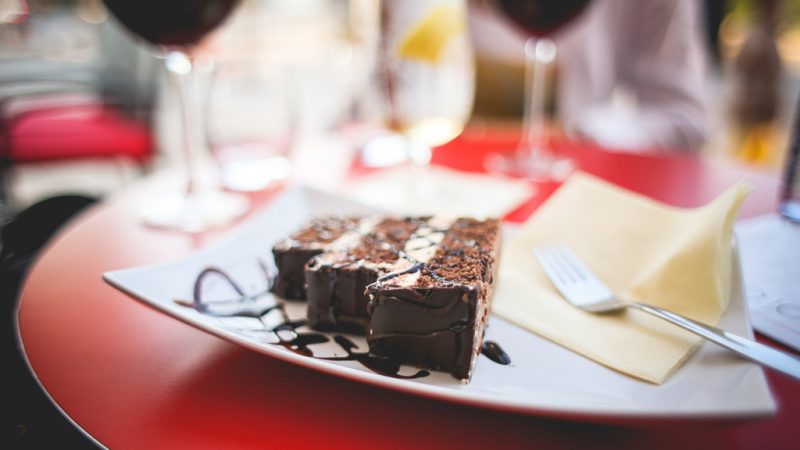 At a party, there were delicious, irresistible cupcakes.  The cupcakes were baked to perfection and placed on a 3-tier cupcake stand made of silver mesh.  The decoration looked like a Christmas tree adorned with cupcakes topped with icing and fresh strawberries.

“Wow, these cupcakes are so beautiful to look at and so tempting, but I am so full,” FM touched her stomach lightly and three of the party guests nodded in agreement.  The buffet spread was filled to the edge of the table with crispy roast duck to fish-paste stuffed mushroom baked with sauerkraut, chicken pastry puff to cornish pie, Greek salad to sweet potato casserole, meat-ball spaghetti to rice with yam and Chinese sausages.  It was a gastronomical feast.  Everyone already had an extra (some triple extras) helping that night.

FM did not want to miss tasting it, so instead of taking one whole cupcake, she suggested: “Why don’t we share the cupcake?”  The girls jumped at the idea.  So, they took one cupcake, sliced it into four small pieces.  They ate and loved the cupcake so much, one girl suggested they cut one more cupcake to share.  They took another cupcake and sliced it into four pieces again.  By the time they realized it, each has taken a whole cupcake in four separate pieces.  No one seemed to complain that they were full.

Whatever you think that was, self-deception or self-motivating (maybe too much food is the former rather than the latter), it is the action that counts.  Taking small, baby steps, bite-size actions are better than just wishful thinking and taking no actions at all.

I was giving a book reading and throughout the session a young woman was so engrossed in every word I said.  At the end of the session, I asked audience to share their experiences.  She stood up and told me that she was so impressed with my work and my writings.  She was also inspired by the last workshop she attended where the previous teacher shared about the principles of finding one’s passion in life.

At last, she said, “Now, I know what I really want to be in my life.”  She paused for a moment, sheepishly she continued, “I want to be like you and also be like my previous teacher.”

I was honored.  I just want to be clear, “What is it that you liked about me and your previous teacher?”

“You both shared so much about happiness and joy, about life. I want to do the same too … to teach these courses.”  She said excitedly.

She looked at me, perplexed.

I tried again, “What are you doing now that you will be able to do what your previous teacher and me are doing?”

She was lost.  She did not have an answer.

The idea is: do whatever it takes to get you closer to your dreams.  Take that first step now.  Stop wishful thinking.