The Three Little Pigs (and your awesome business plan!) 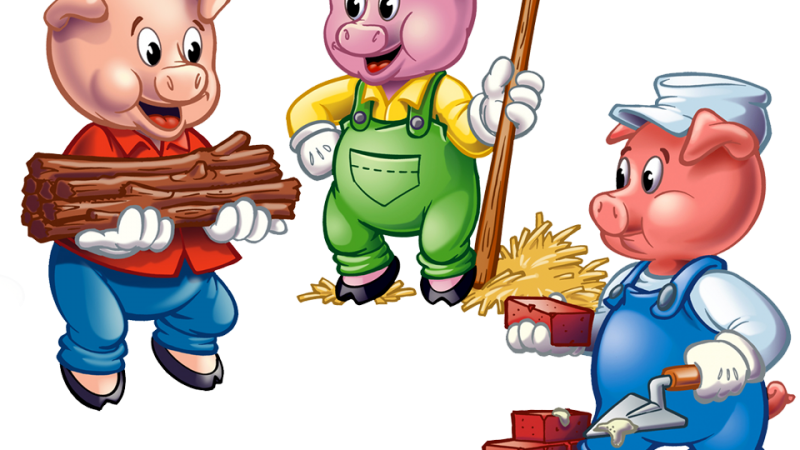 The Three Little Pigs (and your awesome business plan!)

This is the story of the three little pigs. They have all grown up, and they are ready to leave their village and build their own homes. But before they left their village, Mama Pig gave them a sound advice, “Whatever you do, do it the best that you can because that’s the way to get along in the world.”

So, the 3 little pigs set off to build their own homes. Young pig number one wanted everything to be easy, so he chose to use straws, dried leaves, to build his house. Easy to use and not so heavy, so he can save some strength and get to sleep more.

Young pig number two also found himself a beautiful spot, and he decided to build his house out of twigs, dried sticks. Also, not much time needed to finish a beautiful house, he can have some good long sleep too.

Young pig number three listened to Mama Pig’s advice and decided to spend more time to build a house on stronger foundation. So, he chose to use bricks. Although it will take a longer time, more work and more tedious, and he may lose some sleep initially, but he was determined to build his house with a stronger structure.

The big bad wolf was angry, and he stormed over to the third house which was built with bricks and stone. Again, the big bad wolf called out: “Let me in, let me in little pig. If not, I will huff and I will puff and blow your house down. And I will get to you.” The big bad wolf pounded his fist at the door but the three young pigs would not open. The bag bad wolf huffed and puffed, but the house remained strong. The big bad wolf tried again, huffed and puffed but the house did not move an inch. So, the bid bad wolf had to try another trick. He climbed on top of the roof and wanted to drop himself down through the chimney. The young pigs knew the wolf’s sly trick, and together they started a fire under the chimney. When the wolf came down the chimney, he fell into the fire and burned himself to death.

Let’s take this story and apply it to the business or the job you are doing now. Think about Mama Pig’s advise: Did you do your best? Did you prepare your marketing plan? How about your SOPs? What is your Vision and your Mission?

I believe that many of us just ran with an idea, started a business or just did our job. Striving to get in more sales, we hardly sit down, draw up a strategy plan, marketing plan and many of us are not even spending some quiet hours thinking about our vision. How would you like your business or job to be in 5, 10, 20 years?

Like building a house, would you not prepare or check your ‘materials’ for your new career or business? Are you like Young Pig number one, building his house with straws, easy and fast, let’s do it first. Other things such as marketing and operations strategies can come later.

Many of us are still doing business without a clue about our business or job direction. All you want is just to make money by selling some products. Is it ok? Of course, it is ok. The problem is, a big bad wolf, like an economic downturn, or a pandemic, can easily ‘destroy’ your business. Like sailing in the storm, you are lost. Then, what are you left with? Fear, instability and you thought of closing it down and do another business. That is how some of us have moved from business 1 to business 2 to business 3, and wonder why nothing can be established permanently.

Watch an animated video – the 5 things an awesome entrepreneur will do to lead a business forward.

The Federation of Malay Economic Bodies found that out of 100 companies registered with the Companies Commission of Malaysia in the last five years, only 18 had succeeded. Sadly, due to the failure for further development, 60% of the SMEs lost their businesses within a short time.

Where did we go wrong? Based on Leaderonomics research, the eventual decline of most businesses is due to not having a good business plan. This include, among other analyses, no focused mission and vision statements, and they don’t have a feasible marketing plan.

Let us build our career and business like the third little pig, build our house on solid ground with strong foundation and reliable materials. Each brick could represent your dream, your vision and even your SOP. Before you start your business or career, it may be good advice to think thoroughly about how you are going to go to work. Give yourself some time to think, write and verbalize your vision, mission and core values.

One of the benefits of being clear of your direction is that you will not falter no matter what happens. Instead, you will be refreshed with more ideas how to stand up when you are faced with adversities.